The Myth of Well-Roundedness

Can striving to come across as well-rounded actually hurt your chances of admission? 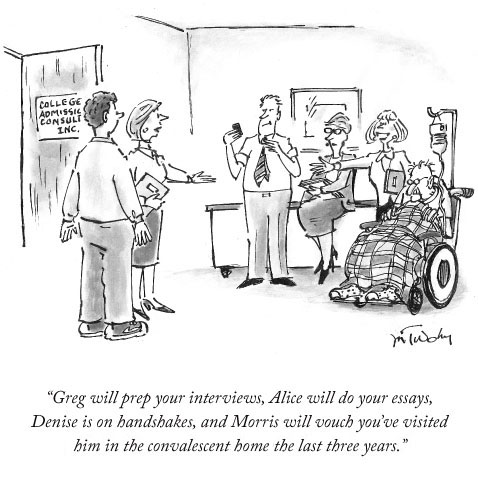 Student A ranks in the top 10 percent of his class, with solid grades across the board.  He writes for his school newspaper, contributes to the yearbook, and plays soccer in the fall and baseball in the spring.  During his junior year, he signed up for Model United Nations, Woodworking, Jazz Band, Puppetry Enthusiasts, Future Business Leaders of America, Modern Dance, Peer Tutoring, and Poetry Club, even appointing himself Vice President of Showing Up for a new student group he founded called the “Resume Padders.”

Student B also ranks in the top 10 percent of her class, but her grades in the humanities aren’t as stellar as her marks in math and science.  She’s never had much of an interest in sports, but she loves technology and started a robotics team at her school.  Building the team from the ground up was challenging, but her efforts paid off when she and her teammates placed 2nd in a prestigious statewide competition.

So which student has the advantage when it comes to college admissions?

For years, students have been told that college admissions committees look for “well-rounded” individuals who excel at, well, everything.  And, on the surface, that advice would seem to make sense.  After all, what college wouldn’t want to attract strong students with diverse interests?

Guttentag adds that Duke still admits many students he would categorize as well-rounded, but “we always have our eyes open for students who do one thing exceptionally or unusually well.”

These specialized students (often referred to as “spike” or “angular” students) stand out not by the breath of their activities, but by the depth of their commitment to one particular endeavor.  As Vanderbilt University states on its college admissions blog, “What really matters to us is that you love what you’re doing.  If you’re just choosing activities to fill a resume, it shows.”

Okay, maybe it’s not that easy.  Suggesting that students become exceptional in something is almost as helpful as suggesting they get perfect grades or test scores.  “You’re on the track team?  Awesome!  Have you considered qualifying for the Olympics?”

In other words, if it were that easy, you’d already be doing it.

But don’t despair.  While admissions officers might not be impressed with your membership in what The Washington Post has called “sign-up clubs”, you can still make yourself stand out by  demonstrating perseverance and initiative, even if you’re merely good at something and not truly great.

Don’t just show up to Debate Club or Model Congress.  Take a leadership position.  Organize a conference.  Write an article about your experience for a local newspaper, discussing how the insights you’ve gained could be used to tackle a pressing social issue.  Will anyone over the age of eighteen take your advice seriously?  Of course not.  Don’t be ridiculous!  But you’ll have demonstrated commitment to an activity, and that’s what counts.

You don’t need to win a Nobel Peace Prize to grab the attention of admissions officers.  You simply need to prove that you take pride in contributing to your school and community, and that you’ll apply the same dynamism when you’re on campus.

That said, if you do win a Nobel, you should probably lead with that.

So what should you do if you’re the kind of student former Yale Admissions officer Ed Boland refers to as a “generic genius?”

If you’re naturally the kind of student who excels at many activities, but you haven’t landed on a specialty yet, take a hard look at your extracurricular pursuits and see how you can weave your disparate interests together.

For example, science and volunteer work don’t necessarily go hand-in-hand.  However, if your dream has always been to work with Doctors Without Borders, a combined passion for science and volunteering makes perfect sense.  Similarly, if you really like sports and math, maybe it’s because you’re laying the groundwork for a career as a high-stakes gambler.

OK, bad example.  But you understand what we mean.  Don’t allow your extracurricular activities to read like a laundry list of fleeting interests.  Search for a common thread among your activities and illustrate how your well-roundedness is actually far more specialized that it might first appear.

That’s what Student A did.  He analyzed his long list of extracurricular activities and wrote his college application essays on the “surprising connections between woodworking and modern dance.”  True, he got rejected from every school he applied to, but he took the money he saved from not going to college and brought his Resume Padders club online, creating the website that is now known as LinkedIn.*

*Some of this may not be true.